May 14 is the big day! The doctor has scheduled that as the day Scarlett Mae Ellis will make her entrance into the world (unless she and God have other plans).

My friend Shelly is an administrator at Collins Career Center in the Ultrasound Tech program, the biggest perk of which is free ultrasounds for her friends, yippee! So, on Thursday I headed over for a peek at our princess. These are the best shots: 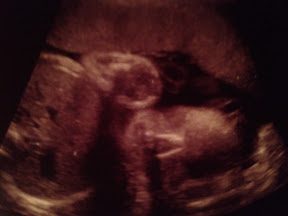 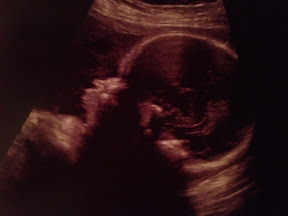 I should note there is also a good shot of the fact that she IS a girl, but since the Internet is forever, I'm keeping her modest, lol!

So now you're wondering why I chose to title the post Alien. Well, the truth is, that's what I think being pregnant feels like. You have no energy because it is all sucked out by the baby. Also, if you've seen the movie (and if you haven't you've had 33 years so don't cry to me over being spoiled) you know that in the movie the first appearance of the alien of when it bursts out of John Hurt's chest. This is basically how it feels the later you get in your pregnancy, like an alien is writhing inside you ready to burst out of your stomach. Also, ultrasound pictures look like pictures of aliens. I love her already and I'm sure she'll be beautiful eventually, but she looks like an alien in her ultrasound pictures and probably will as a newborn. All newborns do, even mine.