Bless You--Martha and the Vandellas

Yesterday I tried to teach Tristan that he is one year old. I said, "Tristan, how old are you? One." then I held up one finger. I did this a couple times and then he held up one finger and said, "Two!" I think he got this from when he is in trouble. He has until the count of three to do what he is supposed to.

He learned another word yesterday. "Tutle," (turtle). He got some new animals to to go with his Ark at mom and dad's, one of which was a turtle. Another animal was a panda and he marches around with it growling.

Today, he came up with something else to say, "Bless you!" When you sneeze, you get the appropriate response. He's so SMART!

Posted by Sabrina at 5:37 PM No comments:

I've Got A Name--Jim Croce

I told you he is expanding he vocabulary every day. If my dad asks him if he can say any name, Momma, Pawpaw, Mawmaw, etc., he says Dada. Today, he did the usual, but when dad asked him if he could say Tristan he said, well, watch this:

Every night since Tristan was born he gets some variation of, "Mommy loves you, night night," as I put him to bed. Tonight he said, "Nie Nie," after I did! I am SO excited I had to share.

Posted by Sabrina at 9:19 PM No comments:

You've Got A Friend In Me--Randy Newman

Tristan has a best friend. There is no doubt about who it is. Addi and Tristan are inseparable! Here are a few pictures I have taken of them this week: 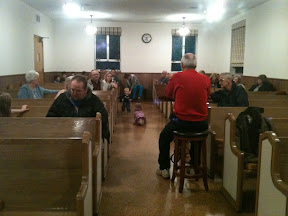 Tristan was crawling and Addi followed during business meeting. 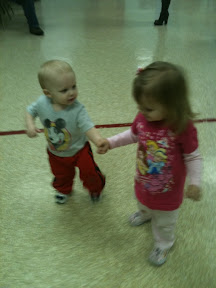 Walking around the Fellowship Hall. 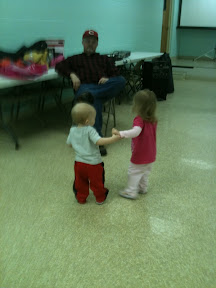 Talking to my dad.

Posted by Sabrina at 3:20 PM No comments:

Going on three months ago, Tristan started holding your hand and walking. Then I stood him up and he walked 3 or 4 steps to my dad then did the same back to me.

Then, he decided he didn't want to walk on his own. He started sitting down as soon as you started to let go. Well, either that or he would pull his feet up and hang off your hands like a monkey to avoid you forcing him to walk.

Over the weekend we went to Florida for my cousin Rachael's wedding. 4 of my mom's 6 sisters were there and with all the attention and excitement Tristan started taking a couple steps here and there between the couch and the table. Monday, in the airport, he took 6 steps between me and my mom, his most yet!

On Tuesday I asked him if he was ready for breakfast, stood him up as I always do and walked toward the kitchen. He just let go of the couch and walked to me! It was only about 8 steps, but it was the first time he had initiated walking by himself. I squealed and jumped and clapped! I was thrilled. I decoded to brush my teeth before breakfast and headed to the bathroom. He played on the side of the tub as usual and when I said let's go and headed toward the kitchen, he followed me walking around 20 or so steps. Cue more fanfare! The third time he walked he pushed himself up from sitting and took off. Its like he was waiting to perfect his walking before he finally let go. We spent Tuesday afternoon on the Grandparents Walking Tour of Huntington.
I intended to take him on the great-grandparents leg of the tour yesterday, but he had a runny nose which today is accompanied by a cough. He acts like he feels fine, so I'm not worried. As soon as he is well, we'll continue the tour.