If I Die Young--The Band Perry

I forgot an important event when I was ticking off Tristan's new verbal accomplishments. On Friday, as we ate dinner, he randomly said uh-oh even though no one had dropped anything. My mom realized the song If I Die Young by The Band Perry was on and asked if he could be singing along. When the second set of "Uh-oh's" came along he did it again! He WAS singing along!

Yesterday, I played the song in the car and he said uh-oh through the whole song! He knew which song was playing. Today I started singing it and he started to uh-oh again. The kid is wicked smart.

As we walked through Wal-Mart tonight, I pointed out things to Tristan like I always do. I said there's a truck to which he said, "cuck!" I asked him if he said truck and he said cuck again.

We were playing with his See and Say and mom asked him where the duck was. He pointed at the duck and quacked! Then she asked where the dog was and he pointed at it and barked!

I'm waiting for him to start saying Momma again. It was the first thing he said, but then a couple months later he just stopped. On Sunday Katelyn asked him where his daddy was (on the family picture) he pointed at Tyler. She asked him where I was in the picture and he turned around and looked at me sitting on the couch. The point being, he knows who I am. I just wish he would say it. 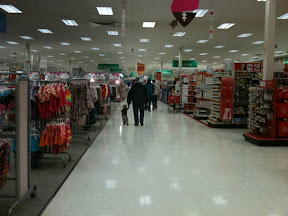 Here he is walking through Target with my dad. Isn't this SO CUTE?!?

Tristan has been on a developmental roll this week.  Just today he said cow and donkey.  He has been saying "ca, ca, ca, ca, ca" (quack) when I ask what a duck says for a couple days now and he can say duck.  He has barked at the dog and a Pluto on Mickey Mouse Clubhouse and at pictures of dogs for a while now.

He's been walking more and more.  He took 4 from dad to me and four back,
again!  He has taken at least two or three steps on his own every day since the first one.
Posted by Sabrina at 11:27 PM 1 comment:

Tristan walked on his own last night!! He's been getting better and better at walking one handed and today he took 8 steps total on his own.

He was trying to follow my mom out of their living room and he thought I had a hold on him. He took 4 deliberate steps on his own before I started yelling for my mom to come and see, which freaked him out. My dad was in the room and freaking out, too!!

A few minutes later I tried to have him demonstrate exactly what had happened so mom could see and he took 4 more steps. After that anytime I tried to let him go, he cried. Little smarty pants.

Later this evening he had me walk him over one handed to his alphabet train. Then, he shook off my hand stood for a minute and sat down. Another thing he had never really done before! He had on his Superman shirt today, I think it was good luck.

I'm hoping he'll have it totally figured out before his birthday!