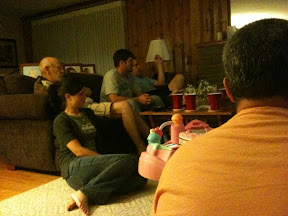 Tonight we had dinner at Tyler's dad's house and watched the Marshall/WVU game. Dinner was steak grilled by Terry, mashed potatoes, green beans, corn and apple cobbler all made by Lisa, and Memaw and Papaw's delicious salad with homemade ranch dressing.

After dinner we watched the game. As fun as it was to watch the Thundering Herd, I think I had more fun listening to Memaw throughout the game. 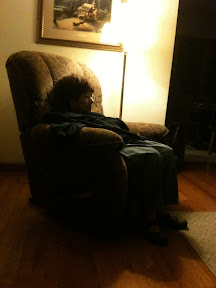 Some of my favorites were:
Terry: "Mother, are you for WVU?"
Memaw: "Lands no! I was hollering for that boy to get down there." (after a field long TD for Marshall)

Terry: "You all are awful quiet over there. Mother isn't even cheering."
Trevor: "That's because Memaw is cheering for WVU."
Memaw: "West Virginia?!? (then under her breath) You've gotta be kidding me."

The guys gave Memaw a hard time, but she bleeds green, I could tell. She was cheering, they just couldn't hear her because Curt was practically in Terry's lap after every play. It was a really fun night. 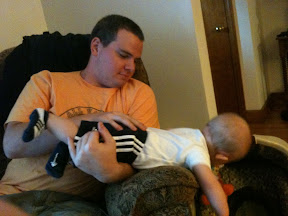 In the immortal words of Coach Sonny Randall, "Go Herd, everybody!" 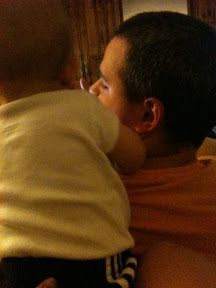