This past week Tristan started really grabbing whatever is in front of him. He's been grabbing and pulling for a while, but now he does it to EVERYTHING. He learned how to pull on the rumbly lion that hangs on his car seat. He holds onto it pretty much the entire time he's in his car seat. He even holds it when he's asleep. SO CUTE! 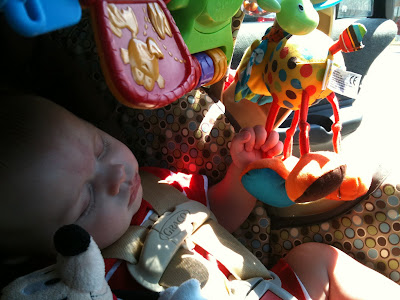 He's so cute and does the funniest things. Mom an I went to dinner the other night and he kicked his little feet up on the table. 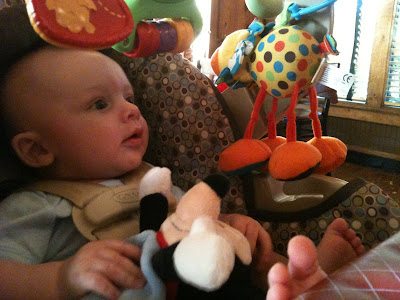 Email ThisBlogThis!Share to TwitterShare to FacebookShare to Pinterest
Labels: Tristan

Tonight was fun. We went to dinner with Britt, Tim, and Addi. Tyler was already up by the mall, so The Arthurs picked me up. The kids and I sat in the back. 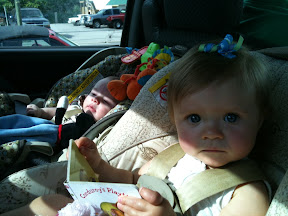 Addi "read" her book, while Tristan played with his Mickey Mouse.

After dinner, Britt and I stopped at Hobby Lobby while the guys went to Wal*Mart to get fishing stuff. When we got home, Addi had her bunny blankie and had yoinked Tristan's Mickey, too! Britt and I spent the evening playing with the kids.

It's good to have friends we are so close to. I LOVE that Timmy is the pastor at our church. God is good.

For whatever reason today I have had the song "Tammy" from the movie "Tammy and the Bachelor" in my head. As usual, my brain started working in it's wild and mysterious ways.

Tyler and I had a similar conversation the other day. His students were studying Physics and one asked about time travel (hey, they're 9th graders). He went into his "Back to the Future"/River Theory of time travel, versus the "Harry Potter and the Prisoner of Azkaban"/Loop Theory. The River Theory is that time is linear. Changing one thing sends everything on a different branch, like in Back to the Future when Marty meets his mom and she falls for him causing he and his siblings to start disappearing from a family picture. He has to get his mom and dad together so he is born. The Loop Theory is that whatever happened, happened. It always happens the same, and any attempts to change things cause them to happen. FYI, he says the Loop Theory is how time travel really works. Wow, i really didn't need to explain all that, but the point was that the kids had never heard of Back to the Future!!!

Tyler and I then proceeded to argue about how kids could not know "Back to the Future". As an example he said our "Sleeping Beauty" is their "Mulan". I told him that was ludicrous because Disney's "Sleeping Beauty" came out in 1959! I just wonder where the kids are like me. "Gone With the Wind" has been my favorite movie since I was a little kid. I read it for the first time in high school! I LOVED all 1,048 pages!

I wonder if it comes down to parents. Parents seem to be less and less involved in their kids lives. I watched GWTW with my mom as a kid. The same goes for "Tammy and the Bachelor." If kids aren't spending time with their parents, they aren't seeing these movies, I mean how many 9 year olds will choose to watch "Gone With the Wind" on their own?

Are these old movies, and even newer ones like "Back the the Future" going to disappear? I hate to thinks so, but it sure seems likely.
Posted by Sabrina at 3:05 PM No comments:

Email ThisBlogThis!Share to TwitterShare to FacebookShare to Pinterest
Labels: thoughts

Tyler makes me CRAZY! I just opened my dryer to find his dress shirts, my underwear and the bathmat all tumbling together!

Tyler likes to bring up that he has been doing his own laundry for years to which my reply is always that he hasn't been doing it right. See Tyler only believes in sorting the clothes into two loads: socks/underwear and everything else. That's it!! All my socks, underwear and whites are a disgustingly grayish brown color. For almost four years I have complained about this. Despite the fact that I do ALL the laundry, he still feels the need to randomly throw loads in here and there. Why can't he randomly pick his crap up from the living room once in a while?

Here's another thing that bugs the poop out of me: he invites people over when the house is a mess (99% thanks to him). He'll say, I'll help you clean and the spend 20 minutes cleaning the whole house. PS It took me longer to clean the kitchen than for him to do the whole rest of the house including scrubbing 2 bathrooms! He just doesn't get that people don't look at a messy house and think, "Man Tyler is a pig." They look at a messy house and think, "Man, Sabrina is a horrible housekeeper." As if it wasn't bad enough before, now I'm a stay at home mom which people think means I just sit at home and sip umbrella drinks. I know, I know. People don't come to my house to "look" at it. But the fact is, while it may not bother you to go to the messy house of a friend or family member, you can't help but think about it.

Sorry to rant, but I just had to get it out and since Tyler is already in bed...

Tristan thinks it is fun when you blow a puff of air in his face. He jumps, sucks in a breath and smiles so big!
- Posted using BlogPress from my iPhone

Tristan is definitely teething. He's been extra slobbery, chewing his hands, putting everything he can get his little hands on into his mouth and he has 2 little white humps on his lower gums. Yesterday he started holding his ear and today he was extra fussy and ran a low grade fever. I wonder when those little boogers will busy through the skin.

In other news, I returned Tristan's Bumbo seat. I found something much cooler on a friend's baby registry and since Tristan had only set in his Bumbo for about 10 minutes total, I didn't feel bad about returning it. What I got is called the Super Seat by Summer Infant. It is a booster seat with a cushy pad that goes in it to use like a Bumbo. You can just use it as a booster or it also comes with a tray that rotates 360 degrees and has 5 toys and 2 little cups for snacks. For $2 more than the Bumbo, it's a much better deal. Here's Tristan in his Super Seat: 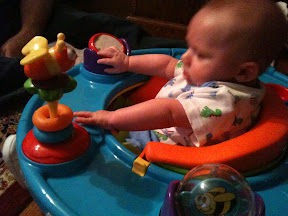 - Posted using BlogPress from my iPhone

The past two weeks have been a developmental whirlwind for Tristan.

Two Sundays ago I had him reclined in my arms at church and all of the sudden, boom! He pulls himself up into a sitting position! I couldn't scream, which is what I wanted to do, because Timmy was in the middle of his sermon.

Last Sunday was my first Mother's Day. Tyler and Tristan got me a diamond solitare ring. It is gorgeous. When we got home Sunday evening I put Tristan down on his play gym. I pulled on the frog to start the music and went to the bathroom. When I came back the music was still playing. It only plays about 15 seconds, so Tristan started it! He then grabbed the frog's leg and started it a few more times. He does this all the time now.

A few days ago Tristan started knawing on his hand. He has started to slobber like crazy and has a white spot on his lower gums. I'm pretty sure he's going to teethe before too long.

Here's what Tristan, Tyler and I made for Tristan's grandmothers for mother's day: 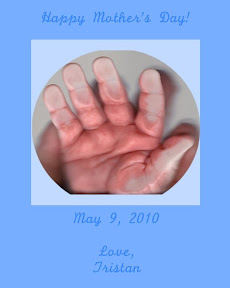 I wanted to do his handprints for the grandmothers. I Googled how to do them intending to find instructions on doing plaster prints, but I found instructions on scanning his hand and liked the idea so much better. Considering I have NO photoshop experience, I think I did a great job.

- Posted using BlogPress from my iPhone

Email ThisBlogThis!Share to TwitterShare to FacebookShare to Pinterest
Labels: Tristan 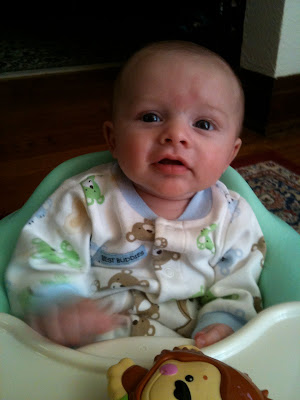 Tristan is growing like a weed! He's can still wear his 0-3 months clothes, but his 3-6 fit too. It won't be long at all before he can't wear his 0-3 months clothes at all.
On Sunday he started to pull himself into a sitting position when you recline him on your lap. He's not content to lay around in your arms anymore unless he's going to sleep. I got him a Bumbo seat and he seems to like it. 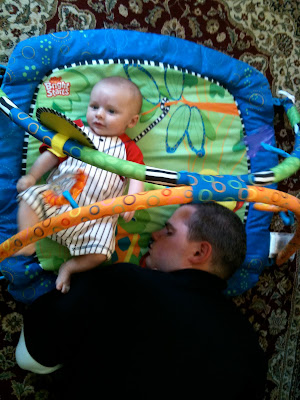 Tristan's Mimi, Lisa, got him a play gym. The first day he pretty much didn't care. On the second day he was eyeing the toys dangling down. By the third day he was batting the toys around. Today he was puling the leg on the frog that is in the middle of the gym. He LOVES looking at himself in the mirror. That's what he's doing in this picture. His daddy was supervising his playtime.

Oh, I almost forgot! Tristan has been sleeping in his own bed in his own room for almost two weeks now! I don't have any pictures since there's no night light or anything.
Posted by Sabrina at 1:28 PM 1 comment: