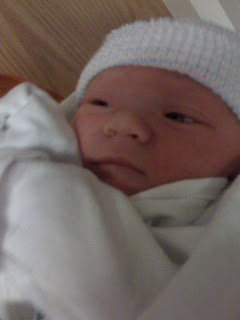 Congratulations to Brittany and Timmy!  Addison was born on February 26 at 3:44pm.  She weighed 6lbs 15oz.  She is beautiful!
Britt and I have been best friends since she was 5.  She started Kindergarten with my brother and when we started going to 26th Street, she and I became best friends.  We have been ever since.  We do everything together, including being each other's Maid/Matron of Honor at our weddings that were less than a month apart.  I was so blessed to be able to see Addison within a couple hours of her being born. 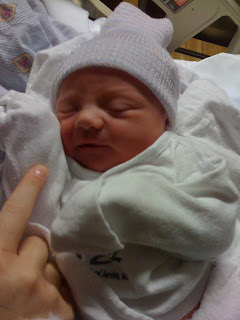 Addison was due on February 23.  Britt was induced at 7:30am on the 26th.  Her labor wasn't terribly intense, but she did have an epidural.  About 2:00pm things started to speed up.  Timmy went to eat in the cafeteria and got a call saying he better hurry cause they were progressing VERY rapidly.  He says he was close to not making it in time. 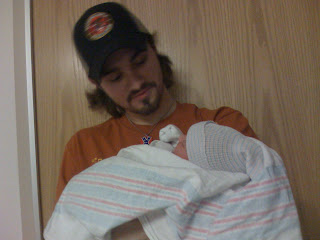 That is my brother Jared holding the baby!  Jared is scared of babies (he says he's not, but it's really just semantics).  He says you could cure cancer, but drop one baby and you're the baby dropper for the rest of your life.  You'll walk down the street and people will say, "Hey, there's the guy who drops the babies!"  Britt told him she was going to make him hold the baby as soon as she was born.  He dreaded it for months, but when the time came, he held that baby like a champ.  He said the only thing that made him nervous was passing her off.
I'm so tired of people saying, "You're next."  If I had my way I would have a baby by now!  If you talk to me, please don't tell me I'm next.
Posted by Sabrina at 5:16 PM