The latest from Tyler is that he got named Platoon Guide (PG). This means he is in charge when the Drill Sergent (DS) is not around, and sometimes when he is. He was surprised because he has pretty much kept his head down. The DS called him to the front of the formation and slapped the rank on him. He says it was because he has excelled in training exercises such as shooting. He says those "city boys" have never even held a gun. My family thinks this is hilarious bacause even compared to me, he's city in our family.

I got an email today from a lady whose church hosted the soldiers at Fort Knox for Operation Appreciation. In the email were 2 pictures of Tyler. I'm not sure who the other guys are, but if I find out, I will post it. Here ya go: 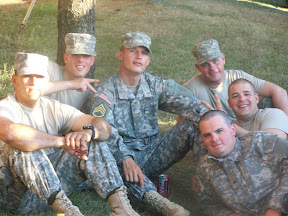 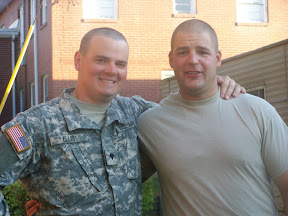